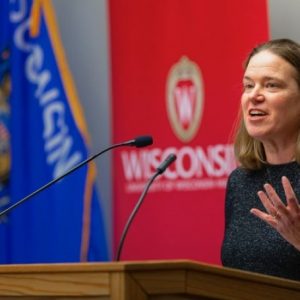 This Focus on the Humanities talk explores the intersection of building and development in south Florida and the environmental movement in the second half of the twentieth century. In particular, it focuses on the Miami-based Deltona Corporation’s efforts to transform Marco Island into a $500 million tropical paradise. Previously a seasonal fishing outpost on Florida’s southern Gulf Coast, Deltona planned Marco to be a vacation and retirement community focused on a six-mile long sandy beach. However much Deltona trilled the island’s “natural charms” to retirees and vacationers nationwide, Marco had to be radically transformed with canals, drainage, and other infrastructure for Deltona’s dream to become a reality. This led to clashes with local residents and environmentalists, who ultimately thwarted Deltona’s plans to produce a much-downscaled community.

Using advertisements and Deltona’s private archive, this lecture showcases a dominant trend in postwar south Florida in which developers simultaneously boasted of the tropical landscape’s natural beauty even as they irrevocably transformed it. In doing so, it shows how developers attempted to circumvent an increasingly regulatory environment while “building paradise” in the American sunbelt.

Anna Andrzejewski is Professor in the Art History Department at the University of Wisconsin in Madison, where she teaches courses in the history of American art, architecture, and material culture. In August she will become the Bradshaw Knight Professor and Director of the Center for Culture, History, and the Environment in the Nelson Institute. Her research centers on American architecture of the nineteenth and twentieth centuries. Her first book, Building Power: Architecture and the Ideology of Surveillance in Victorian America, was published by the University of Tennessee Press (2008). She is currently completing her second book provisionally entitled One Builder: Marshall Erdman and the Postwar Building Industry in the U.S. Her latest research examines vacation and retirement communities in south Florida, part of which examines the relationship between these developments and the tropical landscape.