The annual Nellie Y. McKay Lecture, co-sponsored by the Center for the Humanities, honors one of the foremost educators in the field of African-American Literature and Culture. Nellie Y. McKay (1930-2006) was the Bascom Professor of English and Afro-American Studies and an affiliate faculty member in the Women’s Studies Program at the University of Wisconsin-Madison, where she taught from 1978 until 2006. She held a Resident Fellowship at the 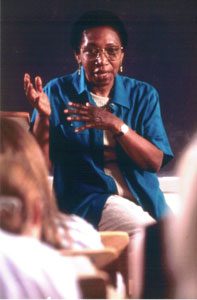 Institute in 1991-1992. A native of New York City, she earned her B.A. from Queens College in 1969 and her Ph.D. in English and American Literature from Harvard University in 1978.

McKay was a leading scholar of 19th and 20th century African American literature, widely known for her book on Jean Toomer, her many essays and editions on black women writers, her national leadership in forging new directions for African American Studies, and her teaching and mentorship of generations of undergraduate and graduate students. As co-editor with Henry Louis Gates Jr. of the Norton Anthology of African American Literature (nominated for the NAACP’s “Image” award), she was instrumental in defining the canon of African American literature for the 21st century. Author of essays on black women writers such as Phillis Wheatly, Zora Neale Hurston, and Harriet Jacobs, McKay was one of the first scholars to bring sustained scholarly attention to Toni Morrison.

There are no upcoming events at this time.