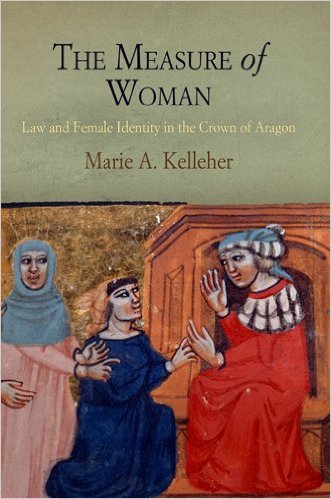 Kelleher, M. A. The Measure of Woman: Law and Female Identity in the Crown of Aragon. Philadelphia, PA: University of Pennsylvania Press, 2010.

Synopsis:
By the end of the Middle Ages, the ius commune—the combination of canon and Roman law—had formed the basis for all law in continental Europe, along with its patriarchal system of categorizing women. Throughout medieval Europe, women regularly found themselves in court, suing or being sued, defending themselves against criminal accusations, or prosecuting others for crimes committed against them or their families. Yet choosing to litigate entailed accepting the conceptual vocabulary of the learned law, thereby reinforcing the very legal and social notions that often subordinated them.

In The Measure of Woman Marie A. Kelleher explores the complex relationship between women and legal culture in Spain’s Crown of Aragon during the late medieval period. Aragonese courts measured women according to three factors: their status in relation to men, their relative sexual respectability, and their conformity to ideas about the female sex as a whole. Yet in spite of this situation, Kelleher argues, women were able to play a crucial role in shaping their own legal identities while working within the parameters of the written law.

The Measure of Woman reveals that women were not passive recipients—or even victims—of the legal system. Rather, medieval women actively used the conceptual vocabulary of the law, engaging with patriarchal legal assumptions as part of their litigation strategies. In the process, they played an important role in the formation of a gendered legal culture that would shape the lives of women throughout Western Europe and beyond for centuries to come.