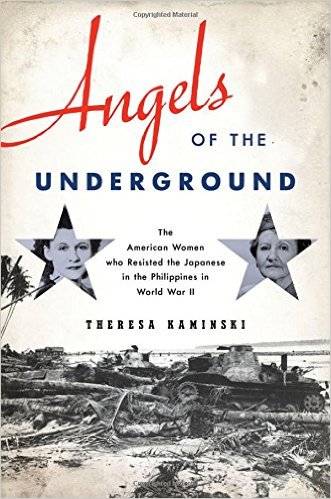 Kaminski, T. Angels of the Underground: The American Women Who Resisted the Japanese in the Philippines in World War II. New York, NY: Oxford University Press, 2015.

Synopsis:
When the Japanese began their brutal occupation of the Philippines in January 1942, 76,000 ill and starving Filipino and American troops tried to hold out on Bataan and Corregidor. That spring, after having been forced to surrender, most of those men were thrown into Japanese POW camps while dozens of others slipped away to organize guerrilla forces. During the three violent years of occupation that followed, Allied sympathizers in Manila smuggled supplies and information to the guerrillas and the prisoners.

Theresa Kaminski’s Angels of the Underground tells the story of four American women who were part of this little-known resistance movement: Gladys Savary, Claire Phillips, Yay Panlilio, and Peggy Utinsky – all incredibly adept at skirting occupation authorities to support the Allied war effort. The nature of their clandestine work meant that the truth behind their dangerous activities had to be obscured as long as the Japanese occupied the Philippines. If caught, they would be imprisoned, tortured, and executed. Throughout the Pacific War, these four women remained hidden behind a veil of deceit and subterfuge.

An impressive work of scholarship grounded in archival research, FBI documents, and memoirs, Angels of the Underground illuminates the complex political dimensions of the occupied Philippines and its importance to the war effort in the Pacific. Kaminski’s narrative sheds light on the Japanese-occupied city of Manila; the Bataan Death March and subsequent incarceration of American military prisoners in camps O’Donnell and Cabanatuan; and the formation of guerrilla units in the mountains of Luzon.

Angels of the Underground offers the compelling tale of four ordinary American women propelled by extraordinary circumstances into acts of heroism, and makes a significant contribution to the work on women’s wartime experiences. Through the lives of Gladys, Yay, Claire, and Peggy, who never wavered in their belief that it was their duty as patriotic American women to aid the Allied cause, Kaminski highlights how women have always been active participants in war, whether or not they wear a military uniform.