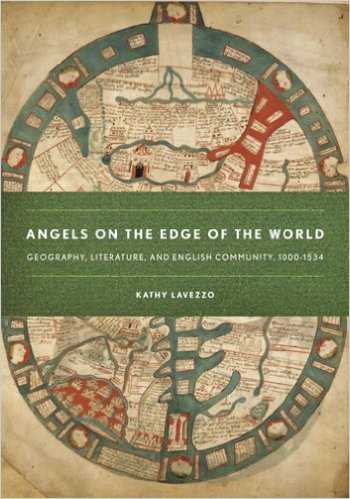 Synopsis:
“The various and contradictory signs of English otherworldliness offered medieval writers a remarkably elastic medium with which to construct national identity. . . . Above all, the wonderful aspects of geographic otherness made it possible for English writers to see their homeland as not only barbarously divided but also blessed and united. Even as they acknowledged England as a barbarous wasteland . . . or as a site of brutal disorder . . . , the English also imagined England as a holy wilderness or as a blessed isle.”―from the book’s introduction

In a view that sweeps from the tenth century to the mid-sixteenth century, Kathy Lavezzo shows how the English people’s concern with their island’s relative isolation on the global map contributed to the emergence of a distinctive English national consciousness in which marginality came to be seen as a virtue. Lavezzo examines the many world maps and textual geographies produced by the English during these years. In a beautifully illustrated book, she argues that the English looked to the globe only to emphasize and, in time, to exalt their own exceptional geographic status. The author charts this process by examining a series of wondrous maps and canonical texts. Demonstrating how medieval geographic notions conditioned English attitudes toward Rome, clarifying the complicated religious history leading up to Henry the Eighth’s divorce and the Reformation, Angels on the Edge of the World straddles the subjects―and methods―of literature, history, and cultural geography. It will be of special interest to those readers who use cartography as a way to map cultural identities.