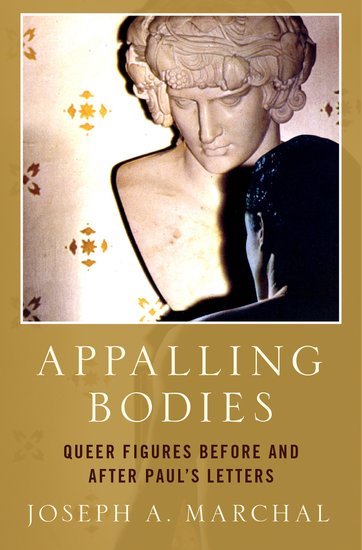 The letters of Paul are among the most commonly cited biblical texts in ongoing cultural and religious disputes about gender, sexuality, and embodiment. Appalling Bodies reframes these uses of the letters by reaching past Paul toward other, far more fascinating figures that appear before, after, and within the letters. The letters repeat ancient stereotypes about women, eunuchs, slaves, and barbarians–in their Roman imperial setting, each of these overlapping groups were cast as debased, dangerous, and complicated.

Joseph Marchal presents new ways for us to think about these dangers and complications with the help of queer theory. Appalling Bodies juxtaposes these ancient figures against recent figures of gender and sexual variation, in order to defamiliarize and reorient what can be known about both. The connections between the marginalization and stigmatization of these figures troubles the history, ethics, and politics of biblical interpretation. Ultimately, Marchal assembles and reintroduces us to Appalling Bodies from then and now, and the study of Paul’s letters may never be the same.