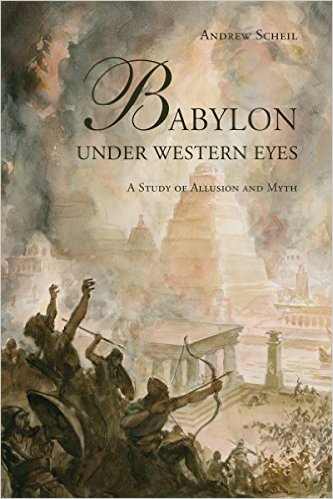 Scheil, A. Babylon Under Western Eyes: A Study of Allusion and Myth. Toronto, ON: University of Toronto Press, 2016.

Synopsis:
Babylon under Western Eyes examines the mythic legacy of ancient Babylon, the Near Eastern city which has served western culture as a metaphor for power, luxury, and exotic magnificence for more than two thousand years.

Sifting through the many references to Babylon in biblical, classical, medieval, and modern texts, Andrew Scheil uses Babylon’s remarkable literary ubiquity as the foundation for a thorough analysis of the dynamics of adaptation and allusion in western literature. Touching on everything from Old English poetry to the contemporary apocalyptic fiction of the “Left Behind” series, Scheil outlines how medieval Christian society and its cultural successors have adopted Babylon as a political metaphor, a degenerate archetype, and a place associated with the sublime.

Combining remarkable erudition with a clear and accessible style, Babylon under Western Eyes is the first comprehensive examination of Babylon’s significance within the pantheon of western literature and a testimonial to the continuing influence of biblical, classical, and medieval paradigms in modern culture.