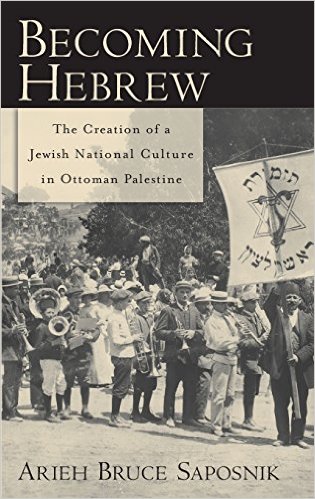 Sapasnik, A. B. Becoming Hebrew: The Creation of a Jewish National Culture in Ottoman Palestine. Oxford, UK: Oxford University Press, 2008.

Synopsis:
“If the Jews wish to become a nation of ‘Jewish Culture,'” Eliezer Ben-Yehuda wrote in 1904, “they must first become truly a nation.” Throughout the subsequent decade, Ben-Yehuda and other Zionist activists in Palestine attempted to transform the small, divided, economically depressed, and demographically declining Yishuv — the pre-state Jewish community — into the foundation of a modern nation. In this book, Arieh Bruce Saposnik tells the story of this transformation.

As Saposnik shows, these activists did not attempt to rewrite Jewish culture simply by uprooting and transplanting themselves, but sought to affect a dramatic revolution in all aspects of Jewish life. They endeavored not only to revise Judaism, but to revise the very definition of culture, and the expanse with which they viewed the word was, in part, what made this group so revolutionary. The new “Hebrew” culture they sought to create encompassed everything from the way in which Yishuv Zionists dressed to the art they created and the literature they read, to the holidays they celebrated, to the language they spoke and the accent with which they spoke it. Politics, economics, and even medicine were mobilized to become dynamic parts of a new Jewish identity.

Saposnik attempts to recapture their comprehensive view of culture and to show how these activists translated images and ideas into concrete cultural institutions, new art, rituals, and language. But, he also argues that this new culture, while expansive, was highly precarious and intensely contested. The Zionists struggled to maintain a complex relationship with traditional Jewish discourses, practices, and liturgy and to forge a delicate balance between the traditional and the novel, “occident” and “orient,” and shifting national centers and peripheries. Through his examination of the Zionist cultural project, Saposnik sheds new light on the origins of Israel and Israeli culture, and on the fundamental building blocks from which modern nations and nationalisms are erected.