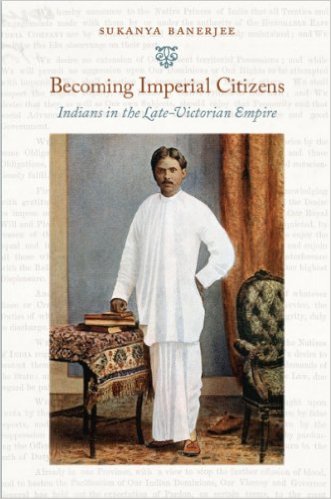 Synopsis:
In this remarkable account of imperial citizenship, Sukanya Banerjee investigates the ways that Indians formulated notions of citizenship in the British Empire from the late nineteenth century through the early twentieth. Tracing the affective, thematic, and imaginative tropes that underwrote Indian claims to formal equality prior to decolonization, she emphasizes the extralegal life of citizenship: the modes of self-representation it generates even before it is codified and the political claims it triggers because it is deferred. Banerjee theorizes modes of citizenship decoupled from the rights-conferring nation-state; in so doing, she provides a new frame for understanding the colonial subject, who is usually excluded from critical discussions of citizenship.

Interpreting autobiography, fiction, election speeches, economic analyses, parliamentary documents, and government correspondence, Banerjee foregrounds the narrative logic sustaining the unprecedented claims to citizenship advanced by racialized colonial subjects. She focuses on the writings of figures such as Dadabhai Naoroji, known as the first Asian to be elected to the British Parliament; Surendranath Banerjea, among the earliest Indians admitted into the Indian Civil Service; Cornelia Sorabji, the first woman to study law in Oxford and the first woman lawyer in India; and Mohandas K. Gandhi, who lived in South Africa for nearly twenty-one years prior to his involvement in Indian nationalist politics. In her analysis of the unexpected registers through which they carved out a language of formal equality, Banerjee draws extensively from discussions in both late-colonial India and Victorian Britain on political economy, indentured labor, female professionalism, and bureaucratic modernity. Signaling the centrality of these discussions to the formulations of citizenship, Becoming Imperial Citizens discloses a vibrant transnational space of political action and subjecthood, and it sheds new light on the complex mutations of the category of citizenship.