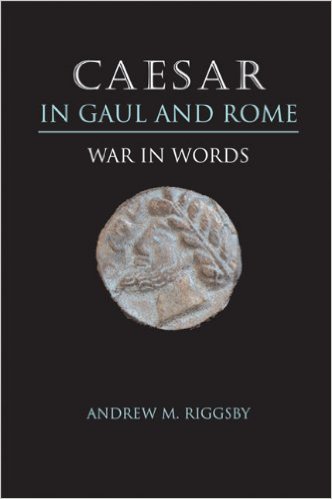 Synopsis:
Anyone who has even a passing acquaintance with Latin knows “Gallia est omnis divisa in partes tres” (“All Gaul is divided into three parts”), the opening line of De Bello Gallico, Julius Caesar’s famous commentary on his campaigns against the Gauls in the 50s BC. But what did Caesar intend to accomplish by writing and publishing his commentaries, how did he go about it, and what potentially unforeseen consequences did his writing have? These are the questions that Andrew Riggsby pursues in this fresh interpretation of one of the masterworks of Latin prose.

Riggsby uses contemporary literary methods to examine the historical impact that the commentaries had on the Roman reading public. In the first part of his study, Riggsby considers how Caesar defined Roman identity and its relationship to non-Roman others. He shows how Caesar opens up a possible vision of the political future in which the distinction between Roman and non-Roman becomes less important because of their joint submission to a Caesar-like leader. In the second part, Riggsby analyzes Caesar’s political self-fashioning and the potential effects of his writing and publishing the Gallic War. He reveals how Caesar presents himself as a subtly new kind of Roman general who deserves credit not only for his own virtues, but for those of his soldiers as well. Riggsby uses case studies of key topics (spatial representation, ethnography, virtus and technology, genre, and the just war), augmented by more synthetic discussions that bring in evidence from other Roman and Greek texts, to offer a broad picture of the themes of national identity and Caesar’s self-presentation.