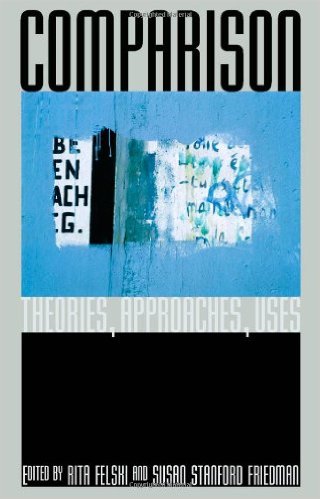 Synopsis:
Writing and teaching across cultures and disciplines makes the act of comparison inevitable. Comparative theory and methods of comparative literature and cultural anthropology have permeated the humanities as they engage more centrally with the cultural flows and circulation of past and present globalization. How do scholars make ethically and politically responsible comparisons without assuming that their own values and norms are the standard by which other cultures should be measured?

Comparison expands upon a special issue of the journal New Literary History, which analyzed theories and methodologies of comparison. Six new essays from senior scholars of transnational and postcolonial studies complement the original ten pieces. The work of Gayatri Chakravorty Spivak, Ella Shohat, Robert Stam, R. Radhakrishnan, Bruce Robbins, Ania Loomba, Haun Saussy, Linda Gordon, Walter D. Mignolo, Shu-mei Shih, and Pheng Cheah are included with contributions by anthropologists Caroline B. Brettell and Richard Handler. Historical periods discussed range from the early modern to the contemporary and geographical regions that encompass the globe. Ultimately, Comparison argues for the importance of greater self-reflexivity about the politics and methods of comparison in teaching and in research.