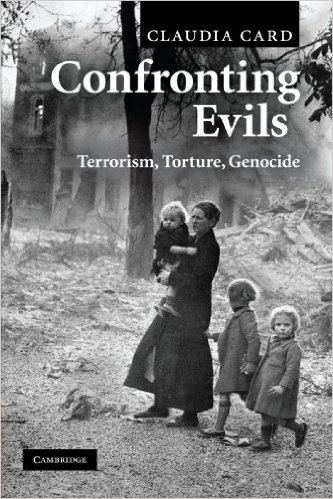 Synopsis:
In this new contribution to philosophical ethics, Claudia Card revisits the theory of evil developed in her earlier book The Atrocity Paradigm (2002), and expands it to consider collectively perpetrated and collectively suffered atrocities. Redefining evil as a secular concept and focusing on the inexcusability – rather than the culpability – of atrocities, Card examines the tension between responding to evils and preserving humanitarian values. This stimulating and often provocative book contends that understanding the evils in terrorism, torture and genocide enables us to recognise similar evils in everyday life: daily life under oppressive regimes and in racist environments; violence against women, including in the home; violence and executions in prisons; hate crimes; and violence against animals. Card analyses torture, terrorism and genocide in the light of recent atrocities, considering whether there can be moral justifications for terrorism and torture, and providing conceptual tools to distinguish genocide from non-genocidal mass slaughter.