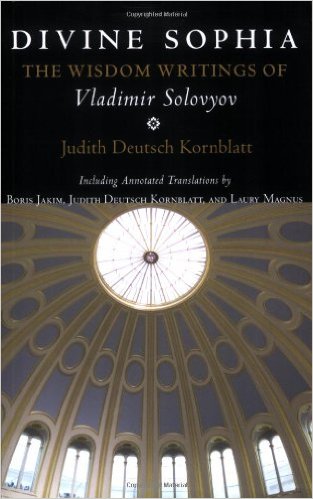 The founder of modern Russian philosophy, Vladimir Solovyov (1853-1900) is widely considered its greatest practitioner. Together with Dostoevsky and Tolstoy, he is one of the towering intellectual figures in late-nineteenth-century Russia, and his diverse writings influenced much of the non-Marxist tradition of twentieth-century Russian thought. Philosopher, journalist, poet, and playwright, Solovyov was also a mystic who claimed to have had three visions of Divine Sophia.

This personification of wisdom with golden hair and a radiant aura echoes both the eternal feminine and the world soul. Rooted in Christian and Jewish mysticism, Eastern Orthodox iconography, Greek philosophy, and European romanticism, the Sophiology that suffuses Solovyov’s philosophical and artistic works is both intellectually sophisticated and profoundly inspiring. Judith Deutsch Kornblatt brings together key texts from Solovyov’s writings about Sophia: poetry, fiction, drama, and philosophy, all extensively annotated and some available in English for the first time (with assistance from the translators Boris Jakim and Laury Magnus).

In the comprehensive introductory essay that encompasses the book’s first half, Kornblatt establishes the historical, philosophical, religious, and literary context of Solovyov’s Sophiology, emphasizing its connection to contemporaneous religious and philosophical thought as well as other social and cultural trends in Europe and the United States―for example, Solovyov’s reactions to his changing world ran parallel to and sometimes intersected with those of Darwin, Nietzsche, and William James. Sophiology is once again finding enthusiasts both in Russia and among seekers around the world.

The definitive introduction to Solovyov’s wisdom and its profound impact on Russian thought and culture, Divine Sophia makes Solovyov’s mystical visions and literary “re-visions” of Sophia accessible to scholars and lay readers alike. Solovyov’s wisdom writings captivated several generations of poets and philosophers during the pre- and postrevolutionary periods in Russia and abroad. In particular, his Sophiology had a profound influence on such major figures of Russia’s Silver Age as Alexander Blok, Andrei Belyi, Pavel Florensky, and Sergei Bulgakov.