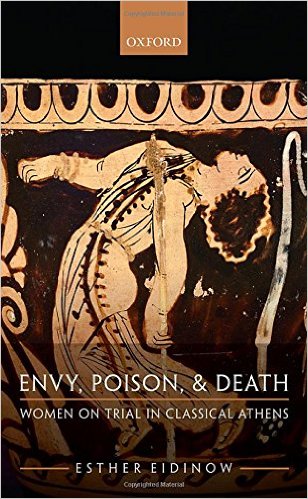 Synopsis:
At the heart of this volume are three trials held in Athens in the fourth century BCE. The defendants were all women and in each case the charges involved a combination of ritual activities. Two were condemned to death. Because of the brevity of the ancient sources, and their lack of agreement, the precise charges are unclear, and the reasons for these women’s trials remain mysterious.

Envy, Poison, and Death takes the complexity and confusion of the evidence not as a riddle to be solved, but as a revelation of social dynamics. It explores the changing factors–material, ideological, and psychological–that may have provoked these events. It focuses, in particular, on the dual role of envy (phthonos) and gossip as processes by which communities identified people and activities that were dangerous, and examines how and why those local, even individual, dynamics may have come to shape official civic decisions during a time of perceived hardship.

At first sight so puzzling, these trials reveal a vivid picture of the socio-political environment of Athens during the early-mid fourth century BCE, including responses to changes in women’s status and behavior, and attitudes toward ritual activities within the city. The volume reveals some of the characters, events, and even emotions that would help to shape an emergent concept of magic: it suggests that the boundary of acceptable behavior was shifting, not only within the legal arena but also through the active involvement of society beyond the courts.