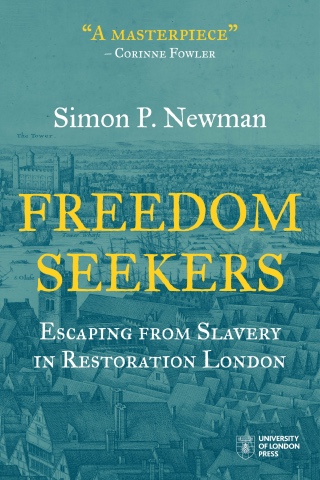 Freedom Seekers: Escaping from Slavery in Restoration London reveals the hidden stories of enslaved and bound people who attempted to escape from captivity in England’s capital.

In 1655 White Londoners began advertising in the English-speaking world’s first newspapers for enslaved people who had escaped. Based on the advertisements placed in these newspapers by masters and enslavers offering rewards for so-called runaways, this book brings to light for the first time the history of slavery in England as revealed in the stories of resistance by enslaved workers. Featuring a series of case-studies of individual “freedom-seekers”, this book explores the nature and significance of escape attempts as well as detailing the likely routes and networks they would take to gain their freedom.

The book demonstrates that not only were enslaved people present in Restoration London but that White Londoners of this era were intimately involved in the construction of the system of racial slavery, a process that traditionally has been regarded as happening in the colonies rather than the British Isles. An unmissable and important book that seeks to delve into Britain’s colonial past.