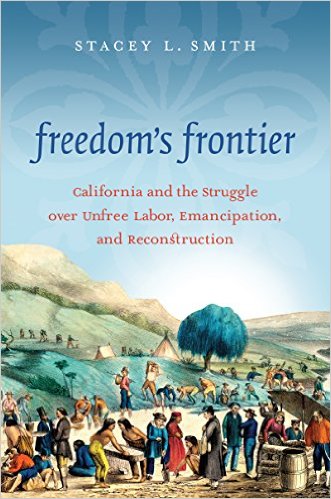 Synopsis:
Most histories of the Civil War era portray the struggle over slavery as a conflict that exclusively pitted North against South, free labor against slave labor, and black against white. In Freedom’s Frontier, Stacey L. Smith examines the battle over slavery as it unfolded on the multiracial Pacific Coast. Despite its antislavery constitution, California was home to a dizzying array of bound and semibound labor systems: African American slavery, American Indian indenture, Latino and Chinese contract labor, and a brutal sex traffic in bound Indian and Chinese women. Using untapped legislative and court records, Smith reconstructs the lives of California’s unfree workers and documents the political and legal struggles over their destiny as the nation moved through the Civil War, emancipation, and Reconstruction.

Smith reveals that the state’s anti-Chinese movement, forged in its struggle over unfree labor, reached eastward to transform federal Reconstruction policy and national race relations for decades to come. Throughout, she illuminates the startling ways in which the contest over slavery’s fate included a western struggle that encompassed diverse labor systems and workers not easily classified as free or slave, black or white.