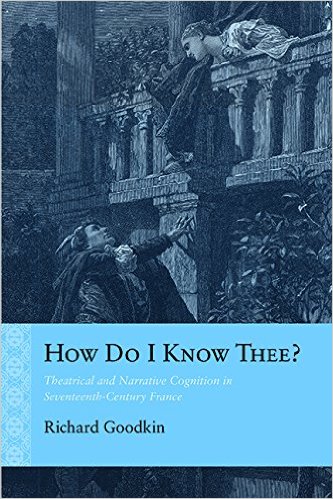 Synopsis:
The classical period in France presents a particularly lively battleground for the transition between oral-visual culture, on the one hand, and print culture on the other. The former depended on learning from sources of knowledge directly, in their presence, in a manner analogous to theatrical experience. The latter became characterized by the distance and abstraction of reading. How Do I Know Thee? explores the ways in which literature, philosophy, and psychology approach social cognition, or how we come to know others. Richard E. Goodkin describes a central opposition between what he calls “theatrical cognition” and “narrative cognition,” drawing both on scholarship on literary genre and mode, and also on the work of a number of philosophers and psychologists, in particular Descartes’s theory of cognition, Freudian psychoanalysis, mid-twentieth-century behaviorism, and the field of cognitive science. The result is a study that will be of interest not only to students of the classical period but also to those in the corresponding disciplines.