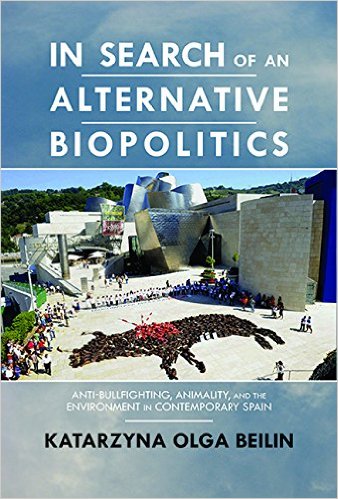 Synopsis:
In Search of an Alternative Biopolitics: Anti-Bullfighting, Animality, and the Environment in Contemporary Spain by Katarzyna Olga Beilin takes readers on a journey through the history of alternative thought that challenges mainstream understandings of the relations between the human and nonhuman realms. Weaving through the works of Mariano José de Larra, Eugenio Noel, Luis Buñuel, Luis Martín-Santos, Pedro Almodóvar, Pablo Bérguer, Juan Mayorga, and Rosa Montero, Beilin convincingly demonstrates that “the question of the animal” has long been of particular significance for Spanish culture.

Analyses of the synergy of press debates on bullfighting and the War on Terror, as well as media debates on King Juan Carlos’s hunt in Botswana and his resignation, reveal how the concepts structuring human/animal relations condition national biopolitics. Beilin traces a main principle, where sacrifice of some lives is deemed necessary for the sake of others, from bullfighting, through environmental destruction and immigration policies, to bioeconomy. Ultimately, In Search of an Alternative Biopolitics argues that to address ever-increasing threats of global warming and future catastrophes, we urgently need to redefine concepts structuring the human and the nonhuman realms.