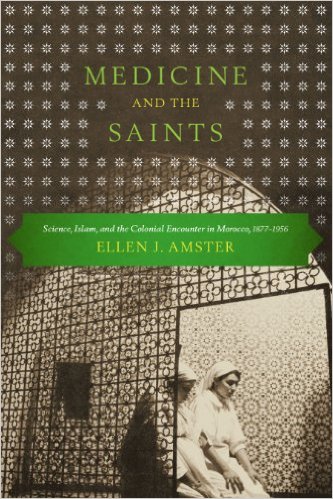 Synopsis:
Exploring the colonial encounter between France and Morocco as a process of embodiment, and the Muslim body as the place of resistance to the state, this book provides the first history of medicine, health, disease, and the welfare state in Morocco.  Because the body politic and the physical body are intimately linked, French efforts to colonize Morocco took place in and through the body. Starting from this original premise, Medicine and the Saints traces a history of colonial embodiment in Morocco through a series of medical encounters between the Islamic sultanate of Morocco and the Republic of France from 1877 to 1956.

Drawing on an interdisciplinary wealth of archival, manuscript, and oral sources in French and Arabic, Ellen Amster investigates the positivist ambitions of French colonial doctors, sociologists, philologists, and historians to transform Morocco; the social history of the encounters occasioned by French medical interventions; and the ways in which Moroccan nationalists ultimately appropriated a French model of modernity to invent the independent nation-state. Each chapter of the book addresses a different problem in the history of medicine: international espionage and a doctor’s murder; disease and revolt in Moroccan cities; a battle for authority between doctors and Muslim midwives; and the search for national identity in the welfare state. This research reveals how Moroccans have ingested and digested French science and used it to create a nationalist movement and Islamist politics, and to understand disease and health. In the colonial encounter, the Muslim body became a seat of subjectivity, the place from which individuals contested and redefined the political.