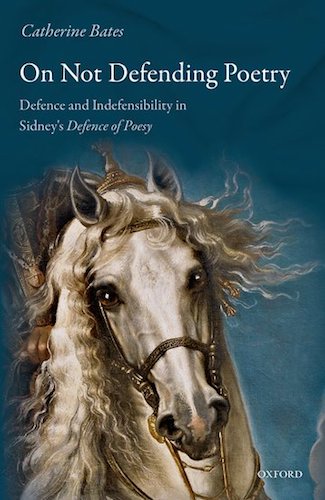 Synopsis:
Sidney’s Defence of Poesy–the foundational text of English poetics–is generally taken to present a model of poetry as ideal: the poet depicts ideals of human conduct and readers are inspired to imitate them. Catherine Bates sets out to challenge this received view. Attending very closely to Sidney’s text, she identifies within it a model of poetry that is markedly at variance from the one presumed, and shows Sidney’s text to be feeling its way toward a quite different–indeed, a de-idealist–poetics. Following key theorists of the new economic criticism, On Not Defending Poetry shows how idealist poetics, like the idealist philosophy on which it draws, is complicit with the money form and with the specific ills that attend upon it: among them, commodification, fetishism, and the abuse of power. Against culturally approved models of poetry as profitable–as benefiting the individual and the state, as providing (in the form of intellectual, moral, and social capital) a quantifiable yield–the Defence reveals an unexpected counter-argument: one in which poetry is modelled, rather, as pure expenditure, a free gift, a net loss. Where a supposedly idealist Defence sits oddly with Sidney’s literary writings–which depict human behaviour that is very far from ideal–a de-idealist Defence does not. In its radical reading of the Defence, this book thus makes a decisive intervention in the field of early modern studies, while raising larger questions about a culture determined to quantify the ‘value’ of the humanities and to defend the arts on those grounds alone.