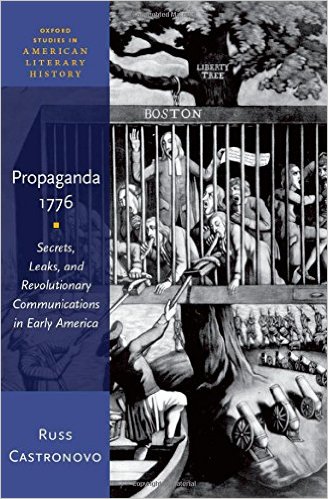 Synopsis:
1776 symbolizes a moment, both historical and mythic, of democracy in action. That year witnessed the release of a document, which Edward Bernays, the so-called father of public relations and spin, would later label as a masterstroke of propaganda. Although the Declaration of Independence relies heavily on the empiricism of self-evident truths, Bernays, who had authored the influential manifesto Propaganda in 1928, suggested that what made this iconic document so effective was not its sober rationalism but its inspiring message that ensured its dissemination throughout the American colonies. Propaganda 1776 reframes the culture of the U.S. Revolution and early Republic, revealing it to be rooted in a vast network of propaganda.

Drawing on a wide range of resources, Russ Castronovo considers how the dispersal and circulation-indeed, the propagation-of information and opinion across the various media of the eighteenth century helped speed the flow of revolution. This book challenges conventional wisdom about propaganda as manipulation or lies by examining how popular consent and public opinion in early America relied on the spirited dissemination of rumor, forgery, and invective. While declarations about self-evident truths were important to liberty, the path toward American independence required above all else the spread of unreliable intelligence that traveled at such a pace that it could be neither confirmed nor refuted. By tracking the movements of stolen documents and leaked confidential letters, this book argues that media dissemination created a vital but seldom acknowledged connection between propaganda and democracy.

The spread of revolutionary material in the form of newspapers, pamphlets, broadsides, letters, songs, and poems across British North America created multiple networks that spawned new and often radical ideas about political communication. Communication itself became revolutionary in ways that revealed circulation to be propaganda’s most vital content. By examining the kinetic aspects of print culture, Propaganda 1776 shows how the mobility of letters, pamphlets, and other texts amounts to political activity par excellence. With original examinations of Ben Franklin, Mercy Otis Warren, Tom Paine, and Philip Freneau among a crowd of other notorious propagandists, this book examines how colonial men and women popularized and spread the patriot cause across America.