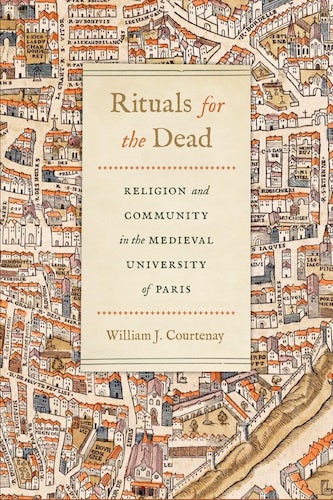 Courtenay, W. J. Rituals for the Dead: Religion and Community in the Medieval University of Paris. University of Notre Dame Press, 2019.

Synopsis:
In his fascinating new book, based on the Conway Lectures he delivered at Notre Dame in 2016, William Courtenay examines aspects of the religious life of one medieval institution, the University of Paris, in the thirteenth and fourteenth centuries. In place of the traditional account of teaching programs and curriculum, however, the focus here is on religious observances and the important role that prayers for the dead played in the daily life of masters and students. Courtenay examines the university as a consortium of sub-units in which the academic and religious life of its members took place, and in which prayers for the dead were a major element. Throughout the book, Courtenay highlights reverence for the dead, which preserved their memory and was believed to reduce the time in purgatory for deceased colleagues and for founders of and donors to colleges. The book also explores the advantages for poor scholars of belonging to a confraternal institution that provided benefits to all members regardless of social background, the areas in which women contributed to the university community, including the founding of colleges, and the growth of Marian piety, seeking her blessing as patron of scholarship and as protector of scholars. Courtenay looks at attempts to offset the inequality between the status of masters and students, rich and poor, and college founders and fellows, in observances concerned with death as well as rewards and punishments in the afterlife. Rituals for the Dead is the first book-length study of religious life and remembrances for the dead at the medieval University of Paris. Scholars of medieval history will be an eager audience for this title.