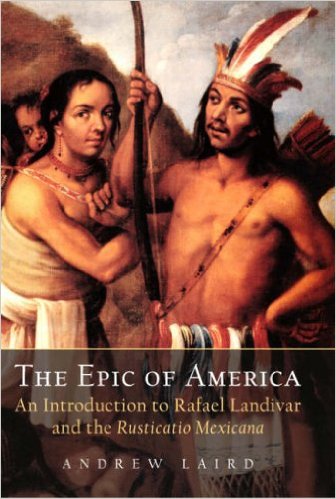 Laird, A. The Epic of America: An Introduction to Rafael Landívar and the Rusticatio Mexicana. London, UK: Bristol Classical Press, 2006.

Synopsis:
Rafael Landívar is the best known of all the poets from the Americas to write in Latin. In the 15 books of his Rusticatio Mexicana (1782), he described — in vivid epic verse — the lakes, volcanoes, and wildlife of Mexico and his native Guatemala, as well as the livelihoods and recreations of the people of the region. This panorama of nature, culture and production in colonial New Spain took classical didactic poetry into a new world of political conflict. But Landívar also writes with a strongly personal voice: elegiac and pastoral modes convey the pathos of displacement and the poet’s overwhelming nostalgia for his American homeland.

Andrew Laird’s introduction provides information about Landívar’s life and exile to Italy, explains his diverse intellectual heritage, and collects his shorter works (translated into English here for the first time). A 1948 text of the Rusticatio Mexicana, with a translation by Graydon W. Regenos, is included in this volume. This accessible and stimulating account of ‘the American Virgil’ highlights the astonishing quality and complexity of the Latin literature of Latin America.