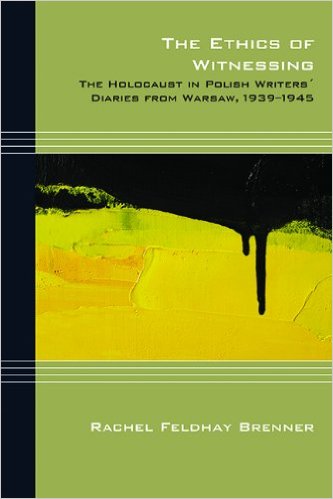 Synopsis:
The Ethics of Witnessing investigates the reactions of five important Polish diarists-writers—Jaroslaw Iwaszkiewicz, Maria Dabrowska, Aurelia Wylezynska, Zofia Nalkowska, and Stanislaw Rembek—during the period when the Nazis persecuted and murdered Warsaw’s Jewish population. The responses to the Holocaust of these prominent prewar authors extended from insistence on empathic interaction with victims to resentful detachment from Jewish suffering. Whereas some defied the dehumanization of the Jews and endeavored to maintain intersubjective relationships with the victims they attempted to rescue, others sell deceptively evaded the Jewish plight. The Ethics of Witnessing examines the extent to which ideologies of humanism and nationalism informed the diarists’ perceptions, proposing that the reality of the Final Solution exposed the limits of both orientations and ultimately destroyed the ethical landscape shaped by the Enlightenment tradition, which promised the equality and fellowship of all human beings.