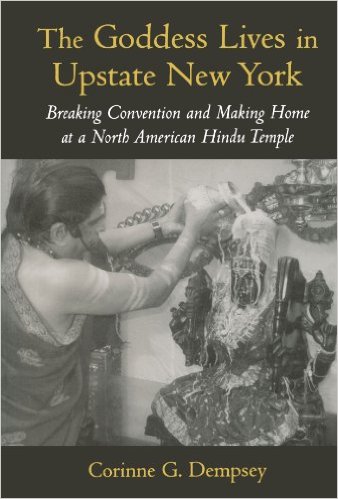 The Goddess Lives in Upstate New York is a profile of a flourishing Hindu temple in the town of Rush, New York. The temple, established by a charismatic nonbrahman Sri Lankan Tamil known as Aiya, stands out for its combination of orthodox ritual meticulousness and socioreligious iconoclasm. The vitality with which devotees participate in ritual themselves and their ready access to the deities contrasts sharply with ritual activities at most North American Hindu temples, where (following the usual Indian custom) ritual is performed only by priests and access to the highly sanctified divine images is closely guarded. Drawing on several years of fieldwork, Dempsey weaves traditional South Asian tales, temple miracle accounts, and devotional testimonials into an analysis of the distinctive dynamics of diaspora Hinduism. She explores the ways in which the goddess, the guru, and temple members reside at cultural and religious intersections, noting how distinctions between miraculous and mundane, convention and non-convention, and domestic and foreign are more often intertwined and interdependent than in tidy opposition. This lively and accessible work is a unique and important contribution to diaspora Hindu Studies.