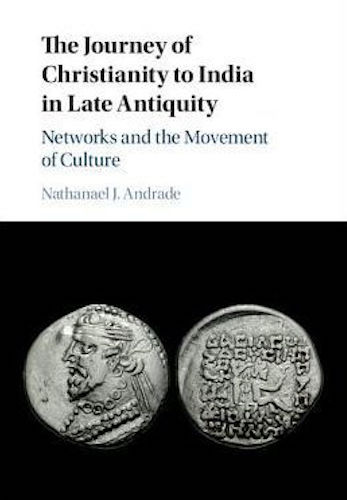 Andrade, N. The Journey of Christianity to India in Late Antiquity: Networks and the Movement of Culture. Cambridge, UK: Cambridge University Press, 2018.

Synopsis:
How did Christianity make its remarkable voyage from the Roman Mediterranean to the Indian subcontinent? By examining the social networks that connected the ancient and late antique Mediterranean to the Indian Ocean, central Asia, and Iran, this book contemplates the social relations that made such movement possible. It also analyzes how the narrative tradition regarding the apostle Judas Thomas, which originated in Upper Mesopotamia and accredited him with evangelizing India, traveled among the social networks of an interconnected late antique world. In this way, the book probes how the Thomas narrative shaped Mediterranean Christian beliefs regarding co-religionists in central Asia and India, impacted local Christian cultures, took shape in a variety of languages, and experienced transformation as it traveled from the Mediterranean to India, and back again.