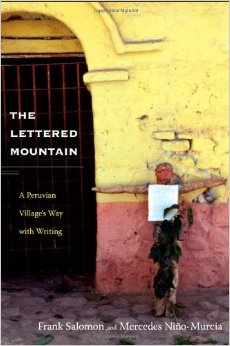 Synopsis:
Andean peoples joined the world of alphabetic literacy nearly 500 years ago, yet the history of their literacy has remained hidden until now. In The Lettered Mountain, Frank Salomon and Mercedes Niño-Murcia expand notions of literacy and challenge stereotypes of Andean “orality” by analyzing the writings of mountain villagers from Inka times to the Internet era. Their historical ethnography is based on extensive research in the village of Tupicocha, in the central Peruvian province of Huarochirí. The region has a special place in the history of Latin American letters as the home of the unique early-seventeenth-century Quechua-language book explaining Peru’s ancient gods and priesthoods. Granted access to Tupicocha’s surprisingly rich internal archives, Salomon and Niño-Murcia found that legacy reflected in a distinctive version of lettered life developed prior to the arrival of state schools. In their detailed ethnography, writing emerges as a vital practice underlying specifically Andean sacred culture and self-governance. At the same time, the authors find that Andean relations with the nation-state have been disadvantaged by state writing standards developed in dialogue with European academies but not with the rural literate tradition.