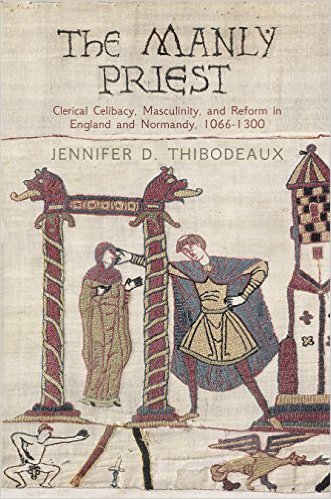 Synopsis:
During the High Middle Ages, members of the Anglo-Norman clergy not only routinely took wives but also often prepared their own sons for ecclesiastical careers. As the Anglo-Norman Church began to impose clerical celibacy on the priesthood, reform needed to be carefully negotiated, as it relied on the acceptance of a new definition of masculinity for religious men, one not dependent on conventional male roles in society. The Manly Priest tells the story of the imposition of clerical celibacy in a specific time and place and the resulting social tension and conflict.

No longer able to tie manliness to marriage and procreation, priests were instructed to embrace virile chastity, to become manly celibates who continually warred with the desires of the body. Reformers passed legislation to eradicate clerical marriages and prevent clerical sons from inheriting their fathers’ benefices. In response, some married clerics authored tracts to uphold their customs of marriage and defend the right of a priest’s son to assume clerical office. This resistance eventually waned, as clerical celibacy became the standard for the priesthood.

By the thirteenth century, ecclesiastical reformers had further tightened the standard of priestly masculinity by barring other typically masculine behaviors and comportment: gambling, tavern-frequenting, scurrilous speech, and brawling. Charting the progression of the new model of religious masculinity for the priesthood, Jennifer Thibodeaux illustrates this radical alteration and concludes not only that clerical celibacy was a hotly contested movement in high medieval England and Normandy, but that this movement created a new model of manliness for the medieval clergy.