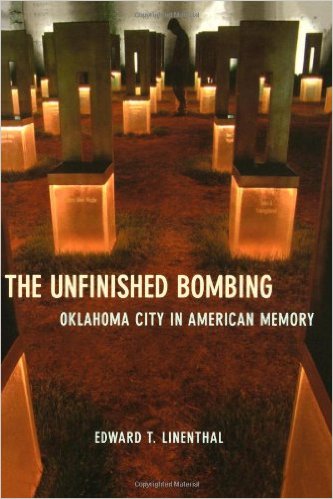 Synopsis:
On April 19, 1995, the bombing of the Alfred P. Murrah Federal Building in Oklahoma City shook the nation, destroying our complacent sense of safety and sending a community into a tailspin of shock, grief, and bewilderment. Almost as difficult as the bombing itself has been the aftermath, its legacy for Oklahoma City and for the nation, and the struggle to recover from this unprecedented attack.

In The Unfinished Bombing, Edward T. Linenthal explores the many ways Oklahomans and other Americans have tried to grapple with this catastrophe. Working with exclusive access to materials gathered by the Oklahoma City National Memorial Archive and drawing from over 150 personal interviews with family members of those murdered, survivors, rescuers, and many others. Linenthal looks at how the bombing threatened cherished ideas about American innocence, sparked national debate on how to respond to terrorism at home and abroad, and engendered a new “bereaved community” in Oklahoma City itself. Linenthal examines how different stories about the bombing were told through positive narratives of civic renewal and of religious redemption and more negative narratives of toxicity and trauma. He writes about the extraordinary bonds of affection that were created in the wake of the bombing, acts of kindness, empathy, and compassion that existed alongside the toxic legacy of the event. The Unfinished Bombing offers a compelling look at both the individual and the larger cultural consequences of one of the most searing events in recent American history.