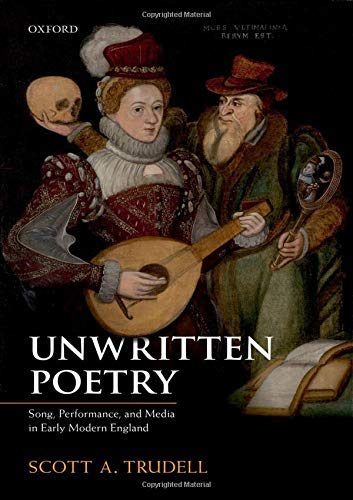 Synopsis:
Vocal music was at the heart of English Renaissance poetry and drama. Virtuosic actor-singers redefined the theatrical culture of William Shakespeare and his peers. Composers including William Byrd and Henry Lawes shaped the transmission of Renaissance lyric verse. Poets from Philip Sidney to John Milton were fascinated by the disorienting influx of musical performance into their works. Musical performance was a driving force behind the period’s theatrical and poetic movements, yet its importance to literary history has long been ignored or effaced.

This book reveals the impact of vocalists and composers upon the poetic culture of early modern England by studying the media through which–and by whom–its songs were made. In a literary field that was never confined to writing, media were not limited to material texts. Scott Trudell argues that the media of Renaissance poetry can be conceived as any node of transmission from singer’s larynx to actor’s body. Through his study of song, Trudell outlines a new approach to Renaissance poetry and drama that is grounded not simply in performance history or book history but in a more synthetic media history.