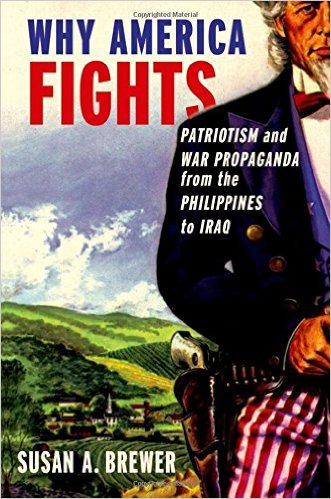 Brewer, S. A. Why America Fights: Patriotism and War Propaganda from the Philippines to Iraq. Oxford, UK: Oxford University Press, 2009.

Synopsis:
On the evening of September 11, 2002, with the Statue of Liberty shimmering in the background, television cameras captured President George W. Bush as he advocated the charge for war against Iraq. This carefully staged performance, writes Susan Brewer, was the culmination of a long tradition of sophisticated wartime propaganda in America.

In Why America Fights, Brewer offers a fascinating history of how successive presidents have conducted what Donald Rumsfeld calls “perception management,” from McKinley’s war in the Philippines to Operation Iraqi Freedom. Her intriguing account ranges from analyses of wartime messages to descriptions of the actual operations, from the dissemination of patriotic ads and posters to the management of newspaper, radio, and TV media. When Woodrow Wilson carried the nation into World War I, he created the Committee on Public Information, led by George Creel, who called his job “the world’s greatest adventure in advertising.” In World War II, Roosevelt’s Office of War Information avowed a “strategy of truth,” though government propaganda still depicted Japanese soldiers as buck-toothed savages. After examining the ultimately failed struggle to cast the Vietnam War in a favorable light, Brewer shows how the Bush White House drew explicit lessons from that history as it engaged in an unprecedented effort to sell a preemptive war in Iraq. Yet the thrust of its message was not much different from McKinley’s pronouncements about America’s civilizing mission.

Impressively researched and argued, filled with surprising details, Why America Fights shows how presidents have consistently drummed up support for foreign wars by appealing to what Americans want to believe about themselves.