A Conversation with G. Willow Wilson 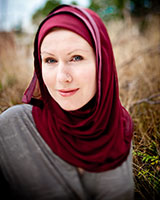 G. Willow Wilson is the acclaimed author of graphic novels and comics published by Vertigo, Marvel, and D.C. Comics. She spent her early and mid-twenties living in Egypt and working as a journalist. Her articles about the Middle East and modern Islam have appeared in the New York Times Magazine, the Atlantic Monthly and the Canada National Post. She describes herself as a “professional genre-bender, casual gamer, and student of religion.” Cairo was named one of the best graphic novels of 2007 by Publisher’s Weekly. Her comic book series Air and Mystic: The Tenth Apprentice was nominated for the Eisner-Award. The Butterfly Mosque, her memoir about life in Egypt during the waning years of the Mubarak regime, was named a Seattle Times Best Book of 2010. Her most recent work, the imaginative techno-thriller Alif the Unseen (2012), was nominated for the UK’s Women’s Prize for Fiction, recommended as a New York Times Notable Book, and is currently in the running for the World Fantasy Award for Best Novel. She has been described as having “the kind of smart, honest writing mind that knits together and bridges cultures and people.”

Co-sponsored by The Lubar Institute for the Study of the Abrahamic Religions. RSVP required by Friday, October 11. Please contact rsvp@irh.wisc.edu.