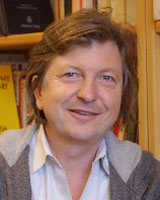 Niklaus Largier will also give a lecture on “Bodies in Prayer: Sense, Sensation, and the Art of Desire” on Monday, March 22, 5:30pm, in 7191 Helen C. White Hall.

Niklaus Largier is currently Chair of the German Department at the University of California-Berkeley. His recent work explores the relation among bodily ascetic practices, eroticism, and the literary imagination. His book Lob der Peitsche: Eine Kulturgeschichte der Erregung (2001) – its American translation was entitled: In Praise of the Whip: A Cultural History of Arousal (ZONE, 2007) – explores the role of flagellation in early religious practice as well as its later associations with modern S/M. A more recent book, Die Kunst des Begehrens: Dekadenz, Sinnlichkeit und Askese (2007) traces the fascination of decadent literature with such religious practices. His current projects include the history of fantasy and the emotions from the Middle Ages to the Baroque era; the history of the senses, of sense experience, and of the stimulation of the senses-especially taste and touch-in medieval, early modern, and modern cultures.

Sponsored by the Mellon Workshop on Corpus: Premodern Books and Bodies, Center for the Humanities, and the Institute for Research in the Humanities.