Assemblage Writing: Posthuman Rhetoric and the Onto-Silencing of Class 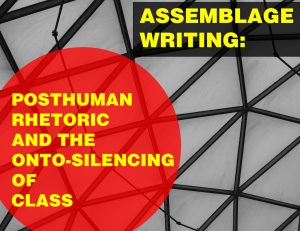 Confronting the humanities today is the question of how to talk about increasing precarity at a time of economic, environmental, and social crises. Traditionally, rhetoric has been understood as a method for articulating opposing viewpoints, enabling them to become part of public discourse and objects of critique. An emerging “posthuman” rhetoric, however, argues rhetoric since Aristotle presupposes a reductive ontology which excludes the nonhuman and centers all conversations about the planet’s future on what matters for humanity alone. Representing critique as an anthropocentric desire for “transcendence,” posthuman rhetoricians call instead for an immanent “rhetoricity of the living” (Davis, “Autozoography”) in which humans and nonhumans are recognized as coexisting in uncertainty on a flat ontological plane that “no particular predicate can circumscribe” (Badiou, Being and Event). But, are the social, environmental, and economic crises we’re facing really caused by what Derrida calls “the great immobile chain of Aristotelian ontology” (Margins of Philosophy), a human-centered arrogance which instrumentalizes nonhuman beings? Addressing claims that rhetorical attentiveness to precarity means abandoning transcending “Grand Emancipation Narratives” in favor of “down-to-earth, terrestrial, embodied” politics of immanence (Latour, Facing Gaia), assemblage writing, I argue, ontologizes precarity as a way of silencing critique of the economic structures at the root of social inequality and environmental crisis. On the contrary, I propose what is necessary today is a re-turn to history—not as existing on a flat, ontological plane but as a dialectical relation of the human and the nonhuman—in order to speak again about emancipation from class.

Rob Wilkie is an Associate Professor in the Department of English at the University of Wisconsin-La Crosse. His books include The Digital Condition: Class and Culture in the Information Network (Fordham University Press, 2011) and the co-edited collection Human, All Too (Post)Human: The Humanities After Humanism (Lexington, 2016). In addition, his work on digital culture, posthumanism, and pedagogy has appeared in such books and journals as Media and Class (Routledge, 2017); Post-Industrial Society (Sage, 2010); Nineteenth-Century Prose; the minnesota review; International Critical Thought; Nature, Society, and Thought; JAC; and Textual Practice.