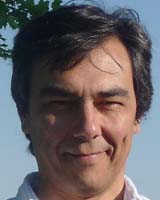 This seminar will focus on the animality of the monsters that appear in late-Victorian gothic fiction. It will explore how evolutionary dynamics inform the narrative representation of figures such as Dracula, Jekyll-and-Hyde, and Dorian Gray and consider the extent to which these rhetorical effects help install a new biopolitical order in post-Darwinian Britain.

Mario Ortiz-Robles is Associate Professor of English. His work to date has focused on the nineteenth-century realist novel, the first truly global literary phenomenon of our modernity, and has availed itself of a reading methodology that situates itself at the intersection of close textual analysis, deconstructive approaches to literary language, and ideology critique. His first book, The Novel as Event (University of Michigan Press, 2010), is an attempt to re-assess the historical claims made about the instrumental efficacy of the realist novel within the complex social processes of subject formation by looking at the role of performative speech acts in a series of canonical works by Dickens, Thackeray, Eliot, Brontë, and Collins. Together with Caroline Levine, he has edited Narrative Middles: Navigating the Victorian Novel (Ohio University Press, forthcoming), a volume of essays that focus on the formal and historical significance of the expansive middle of the long nineteenth-century novel. His work has appeared in Comparative Literature, ELH, and Textual Practice.