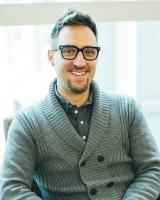 Paul’s letters have often been cited as straightforwardly dictating both heteronormativity and gender conformity, yet the figures deployed within these texts indicate still other potential responses and uses. Thus, this project demonstrates how queer modes within biblical studies can move beyond, by settling in between, stresses upon either ruptures or continuities, alterities versus identifications. This strategy is partially achieved by swerving the focus away from the figure of Paul to those who are being addressed through the letters’ citations of a range of perversely gendered figures. The project as a whole resituates four such citational sites, but this seminar will focus on the case of just one of these interactions, as reflected in a particularly notorious passage within Paul’s first letter to the Corinthians. Within the eleventh chapter of this letter, women’s prayer and prophecy are discussed in light of hair and head coverings, alongside divine images and natural differences. Thus, this project’s swerve in focus, in turn, leads the analysis “sideways” to ancient Roman imperial notions of androgynes, and then towards contemporary concepts of female masculinity (as practiced and alternatively embodied by butch lesbians, transgender dykes, and drag kings), in order to move “backwards” to the Corinthian women prophets biblically behind the letter. Such anachronistic juxtapositions help this project trace the corresponding confusions and combinations between these sites and restage how the letter refers to multiple temporalities and alternative configurations of the body.

Joseph A. Marchal is an associate professor of Religious Studies and affiliated faculty in Women’s and Gender Studies at Ball State University. His work explores, combines, and elaborates aspects of feminist, postcolonial, and queer approaches, crossing between biblical studies and critical theories of interpretation, the ancient world and its many, very contemporary echoes and impacts. Marchal is the author of The Politics of Heaven: Women, Gender, and Empire in the Study of Paul (2008), Hierarchy, Unity, and Imitation: A Feminist Rhetorical Analysis of Power Dynamics in Paul’s Letter to the Philippians (2006), and the forthcoming Philippians: Historical Problems, Hierarchical Visions, and Hysterical Anxieties. He is also the editor of Studying Paul’s Letters: Contemporary Perspectives and Methods (2012) and the forthcoming People Beside Paul: The Philippian Assembly and History from Below.