Contemporary Drift: Genre, Historicism, and the Problem of the Present 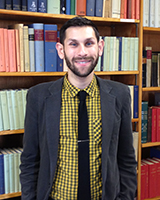 What do we mean when we call something—art, culture, history—”contemporary”? While scholars tend to refer to the contemporary as if it were the name for a clearly demarcated historical period, the contemporary isn’t really like other historical periods—for the simple reason that, as something ongoing and open-ended, it is not yet historical. This talk considers how the not-quite-historical category of the contemporary first emerged as a framework for literary studies in the mid-twentieth century, and how it has challenged some of the basic methodological assumptions of the discipline in ways that are still being reckoned with today. What would it mean, I ask, to think of the contemporary not as a stable period but as a conceptual problem? And what it would mean to see certain forms of contemporary fiction as a vital resource for resolving that problem?

Theodore Martin is Assistant Professor of English at the UW-Milwaukee. He specializes in post-1945 American and British fiction. His work has appeared in Modern Language Quarterly and Novel: A Forum on Fiction, and is forthcoming in the edited volume Postmodern/Postwar and After (University of Iowa Press). He is currently finishing a book titled “Contemporary Drift: Genre and the Forms of the Present.” He is also writing the entry on “Temporality” for the Oxford Research Encyclopedia of Literature.