Democracy in Black: Identity Politics in a Post-Soul Era 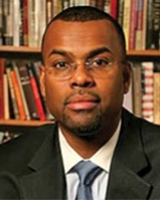 In his lecture, Glaude explores how “whiteness” continues to distort American democracy, disfiguring our precious ideals into unsightly and dangerous justification for ugly practices that ultimately cast away democratic principles, and eventually, people. This distortion requires a response, specifically from those who are disproportionately affected by the unseemly machinations of whiteness in our politics. Those who suffer injury, in part because they are not white, must give voice to the distinctiveness of their experiences in order to expand democratic possibility. Black politics, at its best, has done precisely this. No matter the specific demands of the black freedom struggle throughout our history, the one constant has been a complete and unequivocal rejection of the oxymoronic idea of “white democracy.” But the public expression of black suffering has become increasingly difficult today, because “white democracy” trades in the language of color-blindness and the political idea of Black America has collapsed in the face of internal differences unleashed in what can be called a post-soul era.

Galude confronts a possible paradox: that the current expression of “white democracy” requires a response in the form of black identity politics, but the political idea of Black America has collapsed in the face of fragmenting black communities, where the once powerful ideal of black solidarity crumbles under the weight of internal class and generational differences. Glaude answers the paradox with a call for a more robust form of black identity politics attuned to the differences within black communities and rooted in a grassroots democratic ethos that exposes the continued political and moral work of “whiteness” in America.

Professor Eddie Glaude‘s research interests include American pragmatism, specifically the work of John Dewey, and African American religious history and its place in American public life. He is the recipient of numerous fellowships and awards, including the 2002 Modern Language Association William Sanders Scarborough Prize for his book Exodus! (2000). He has also co-edited, with Cornel West, African-American Religious Thought: An Anthology (2004).