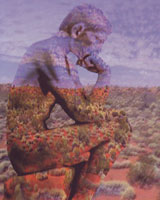 The idea of the Anthropocene, the geological era where the actions of people have affected every biophysical system on earth, poses a particular challenge to the humanities. It is an idea coming from global change science, but it has political implications and depends on a deeply historical understanding of what constitutes ‘environment’. If people have affected the planetary system, how have they done it? When did the actions of people start to overwhelm ‘normal’ change in environmental systems? When, some ask, did people become a ‘plague species’ on Earth?

This project seeks to ‘document’ the Anthropocene, literally, to explore some of the documents that shape our present understanding of the environment. In a world where measurement is a pre-eminent element of prediction and numbers have become a global language for science (and increasingly for policy), the question what counts as planetary change is political and ethical, as well as scientific. Critical scrutiny of ideas that underpin numbers and frame planning for the future of the planet is an urgent and deeply humanistic task. Our documents are just some of the possible ones, but I will speak about why we chose them and how they might serve to offer ways into debates about global change, ways that start from the human dimensions, rather than treating them as late additions to a program already fully defined by experts from elsewhere.

Libby Robin is an environmental historian and historian of ideas at the Australian National University and at the National Museum of Australia, Canberra. She is Guest Professor at the Royal Institute of Technology (KTH), Stockholm. Her books include How a Continent Created a Nation (2007), The Flight of the Emu (2001) and Ecology and Empire: Environmental History of Settler Societies (1998, co-edited with Tom Griffiths). The Future of Nature: Documents of Global Change, an anthology of the literature of global change, co-edited with Sverker Sörlin and Paul Warde, is forthcoming with Yale University Press.

Institute for Research in the Humanities
Global Studies
Center for Culture, History, and Environment