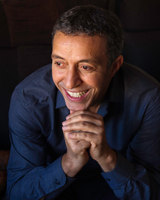 This talk will be followed by a screening of Le gone du Chaâba.

Azouz Begag, an internationally acclaimed French writer, has published more than twenty books, most of which are subject to various problems faced by the youth of North African origin, caught between two cultures as well as between tradition and modernism: poverty, racism, unemployment, self-destruction, and despair. Originally Algerian, Azouz Begag was born in the suburbs of Lyon in France in 1957. He holds a Ph.D. in Economics from the University Lyon 2 and leads from the front three careers: novelist, sociologist, and politician. Researcher at the CNRS and the House of Social and Human Sciences in Lyon since 1980, he is a specialist in socio-urban economy: his work is largely on the mobility of immigrant populations in urban areas.