Fantasy as Microaggression?: Racial Caricature, Kawaii-style, and the Anthropomorphic Asian 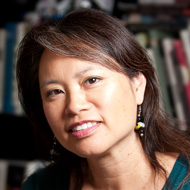 How does the mundane object serve as a catalyst for exploring the relationship between aesthetics and political injury? Is race always bound to the circulation of negative feeling? We understand the harm embodied by the mammy cookie jar. Yet in the 21st-century, the anthropomorphic object has found new life: geisha cars, Harajuku Lovers perfume bottles, Chanel’s “China Doll” handbags, Alessi’s “Mandarin” juicer. Do these forms of racial kitsch—the Asian figure as salt shaker, decor, or toy—evade contextualization as racist kitsch? This lecture engages the Japanese style known as kawaii or cute style since the 1970s as it finds expression in a specific racial form. In looking at the feeling that the “cute” enables or forecloses, this talk explores the vacillation between pleasure and pain underlying Asian American spectatorship of racialized things. Exploring the convergence among theories of aesthetic form, affect, and stereotyping, this talk seeks to uncover the utility of fantasy and force of nonhuman actants.

Leslie Bow is Vilas Distinguished Achievement Professor and Mark and Elisabeth Eccles Professor of English and Asian American Studies at the University of Wisconsin-Madison. She is the author of the award-winning, ‘Partly Colored’: Asian Americans and Racial Anomaly in the Segregated South; Betrayal and Other Acts of Subversion: Feminism, Sexual Politics, Asian American Women’s Literature; and editor of Asian American Feminisms.

Presented in partnership with the Burdick-Vary Lecture Series: Asian Americans and the Pleasures of Fantasy.