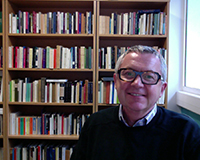 Free and open to the public.

Simon Gaunt has taught at the University of Cambridge and King’s College London, where he has been Head of French and Dean of Arts and Humanities. His books include Gender and Genre in Medieval French Literature (1995), Martyrs to Love: Love and Death in Medieval French and Occitan Courtly Literature (2006) and Marco Polo’s Le Devisement du Monde: Narrative Voice, Language, and Diversity (2013). He is co-editor of The Troubadours: An Introduction (1999), Marcabru: A Critical Edition (2000) and The Cambridge Companion to Medieval French Literature. He is currently working on the cultural value and contours of French outside France in the Middle Ages.