Grieving Alone, Grieving Together: Psychological and Social Mourning in Film 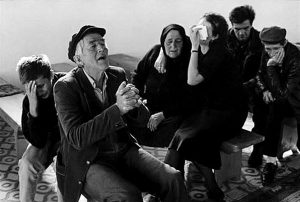 The phenomena of individual mourning and collective mourning have both attracted a good deal of critical attention in literature and film studies, but what are the similarities and differences that link and separate these two very different forms of bereavement? The central goal of this conference will be to examine the articulation between two types of cinematic representations of mourning and the critical approaches associated with them, the corpus of works discussed to be be drawn from a number of different cultural traditions. The speakers, specialists in disciplines ranging from film studies to history and literature, will study both films in which individuals experience the mourning process as a solitary, intimate experience and films that present characters whose losses are shared by an entire society or segment of society. Of particular interest will be films that encompass both aspects of mourning and suggest to viewers how the two might be related. The speakers will seek out meaningful mediations between, on the one hand, psychological approaches to mourning, viewed in the context of how loss affects and shapes the course of individual lives, and on the other hand, sociologically inflected approaches to collective mourning, considered in the context of patterns of immigration as well as other forms of social upheaval.

Institute for Research in the Humanities
Department of Communication Arts