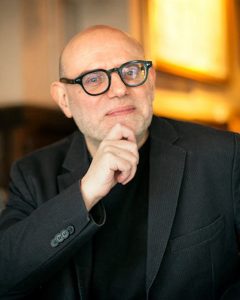 Susan and Barton Winokur Professor in the Humanities, Cornell University

How many layers of French history does the highly controversial slogan Je suis Charlie conceal? Over the last three decades, the French national past has been put into question: Vichy, the Holocaust, the Algerian War, and finally May 68 are crucial events that continuously resurge into the public sphere, where they are reinterpreted through the prism of present worries and sensibilities. Far from being monolithic, this process of memory construction is necessarily plural and conflicted, alternating between moments of forgetting, anamnesis and obsession; it shakes the traditional procedures of history writing as well as old national myths and narratives. This talk will explore French national remembrance as an entanglement of multiple, changing identities.

Enzo Traverso’s research focuses on the intellectual history and political ideas of Europe in the twentieth century. He was born in Italy, studied history at the University of Genoa, and received his Ph.D. from the Ecole des Hautes Etudes en Sciences Sociales (EHESS) of Paris in 1989. Before coming to Cornell in 2013, he taught political science for many years in France, and has been a visiting professor at many universities in Western Europe and Latin America. His books include The Origins of Nazi Violence (New York: The New Press, 2004); The End of Jewish Modernity (London: Pluto Press, 2016); Fire and Blood: The European Civil War 1914-1945 (London-New York: Verso, 2016); and Left-Wing Melancholia: Marxism, History, and Memory (New York: Columbia University Press, 2017).