If It Were Only the Blues 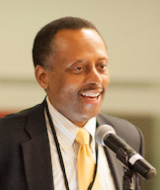 Earl Lewis is President of the Andrew W. Mellon Foundation. A well-regarded social historian, he has been a champion of the importance of diversifying the academy, enhancing graduate education, re-visioning the liberal arts, exploring the role of digital tools for learning, and connecting universities to their communities. Before joining the Mellon Foundation, he served as Provost and Executive Vice President for Academic Affairs and the Asa Griggs Candler Professor of History and African American Studies at Emory University, and as vice provost and dean of the Horace H. Rackham School of Graduate Studies at the University of Michigan. He held faculty appointments at the University of California, Berkeley and the University of Michigan. The author and co-editor of seven books including the eleven-volume Young Oxford History of African Americans, he has written numerous essays, articles, and reviews on different aspects of American and African American history. His recent books include The African American Urban Experience: Perspectives from the Colonial Period to the Present (2004), and Defending Diversity: Affirmative Action at the University of Michigan (2004).

Institute for Research in the Humanities
Center for the Humanities, UW-Madison
Department of Afro-American Studies
Gender and Women’s Studies Department
English Department
Anonymous Fund of the College of Letters & Science