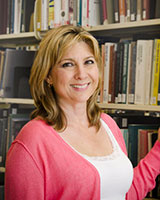 In 1919, Sir John French, Lord Lieutenant of Ireland, brought together representatives from throughout Ireland to establish a national war memorial that would commemorate the 50,000 Irish dead from the First World War. By 1923, despite two wars on Irish soil, an assassination attempt on French, and the problematic position of Irish soldiers who fought for the British in the war, the Committee of the Irish National War Memorial published one hundred copies of an eight-volume set of alphabetized rolls titled Ireland’s Memorial Records, 1914-1918: Being the names of Irishmen who fell in the Great European War. Engravings by the Dublin illustrator and stained glass designer Harry Clarke (1889-1931) distinguish these volumes. They are copiously and intricately engraved in the fantastic Art Nouveau style for which Clarke is recognized, incorporating nationalist Celtic imagery, battle scenes, and silhouettes of soldiers in action. Housed in a special bookroom designed by Edwin Lutyens at the national war memorial in Dublin and relatively forgotten since their publication, Ireland’s Memorial Records reveal a complex response to traditions of war remembrance in England and Ireland.

Marguerite Helmers, University of Wisconsin System Fellow, is Professor of English at the University of Wisconsin Oshkosh, where she teaches courses in writing, rhetoric, and British literature. She received her Ph.D. in Rhetoric and Composition Studies from the University of Wisconsin-Milwaukee in 1992. She is the author or editor of five books, including Defining Visual Rhetorics (Erlbaum) and The Elements of Visual Analysis (Pearson). Her articles have appeared in College English, JAC: The Journal of Advanced Composition, and the Journal of War and Culture Studies. Currently, she is completing an article on British Ordnance Survey maps of the Western Front during the First World War. Other publications on the visual culture of the First World War include “Iconic Images of Wounded Soldiers by Henry Tonks” (Journal of War and Culture Studies, 2010); “A Visual Rhetoric of WWI: C. R. W. Nevinson, Mary Riter Hamilton, and Kenneth Burke’s Scene” (The Space Between, 2009). She is also the series editor of the Visual Rhetoric Series at Parlor Press.