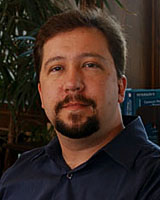 Concern over and condemnation of superstition (always a negative category) surged in the late Middle Ages (fourteenth and fifteenth centuries), embodied finally in the person of the learned demonologist and witch-hunting magistrate, who saw himself as opposing the worst forms of superstition imaginable. Yet demonologists and witch-hunters themselves became, in later centuries, the very embodiment of an “irrational” and “superstitious” Middle Ages that modern, Enlightened European society had overcome. This presentation will explore how much of the discourse of European modernity rests a discourse of “disenchantment” and opposition to superstition while also examining the historical connections between medieval and modern conceptions of superstition as a way to call into question any supposedly sharp medieval/modern divide.

Michael D. Bailey is Associate Professor of History at Iowa State University. His research focuses on magic, superstition, and heresy, mainly in late medieval Europe. He has been a Fulbright fellow, a DAAD fellow, and an Alexander von Humboldt fellow, as well as holding a Mellon postdoctoral fellowship at the University of Pennsylvania. He is the author of three books: Battling Demons: Witchcraft, Heresy, and Reform in the Late Middle Ages (2003), Historical Dictionary of Witchcraft (2003), and Magic and Superstition in Europe: A Concise History from Antiquity to the Present (2007), translated into Italian as Magia e superstizione in Europa dall’ Antichità ai giorni nostri (2008). He has also authored a dozen articles, and from 2006 through 2010 was the founding co-editor of the interdisciplinary journal Magic, Ritual, and Witchcraft.