Notes Toward a Theory of Resistance 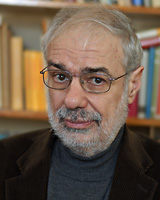 Weimar’s weak liberal state folded into Fascism. In the US since the 1970’s critics have warned about “fascism with a friendly face” and more recently a US form of fascism (Hedges) or Inverted Fascism (Wolin). What do these dire predictions represent? What lessons from Weimar thinkers, Schmitt, Arendt, Strauss on the “political”? More particularly, what did and does psychoanalysis from Fromm to recent theorists (Badiou, Summers) add to any conjectural theory of political resistance and where is law in this set of issues.

Professor Leonard Kaplan received his undergraduate and law degrees from Temple University in 1962 and 1965, and an LL.M from Yale Law School in 1966. He received a Ph.D. in Psychology from the University of Chicago in 1977, and he was a Research Fellow at the Chicago Institute for Psychoanalysis. He taught at the University of Nebraska Law School from 1966 to 1968, and served as a Staff Attorney in the office of Community Legal Counsel in Chicago from 1971 to 1974, when he joined the University of Wisconsin Law School faculty. Professor Kaplan has co-edited six books and written over thirty articles. He was a co-founder and co-editor-in-chief of a journal, Graven Images: Studies in Culture, Law and the Sacred, now a book series with Lexington Books (Rowman Littlefield). He is the director of the Law School’s Project for Law and the Humanities. He also has been a member of the Editorial Board of the International Journal of Law and Psychiatry since 1977. He has served on the organizing committee for International Congresses on Law and Psychiatry through the 1990s to date. Professor Kaplan was First Vice President, and a member of the Executive Board of Directors of the International Academy of Law and Mental Health since 1992. In 2009 he became President-elect of the organization. In 2002, Professor Kaplan received the Academy’s Michael Zeegers Lifetime Achievement Award for distinction in the pursuit of Scholarship, Pedagogy, and Human Rights Initiatives in the field of Law and Mental Health.