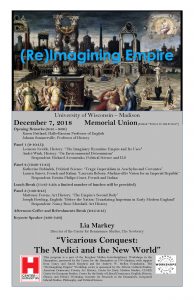 Leonora Neville, History: “The Imaginary Byzantine Empire and Its Uses”

Lia Markey, Director of the Center for Renaissance Studies, the Newberry: “Vicarious Conquest: The Medici and the New World”