Sushi, Otters, and Mermaids: Race at the Intersection of Food and Animal Studies 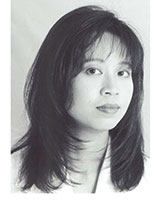 English and the Center for African American Studies, Princeton University

What do sushi, food, race, and anthropology have to do with each other? Taking a scene of sushi eating in David Wong Louie’s short story “Bottles of Beaujolais” as a springboard into a larger meditation on the “nature” of human eating, this paper traces the often unspoken racial logic that subtends and connects the question of who is human and what is it that we eat.

Anne Anlin Cheng is Professor of English and of the Center for African American Studies. She specializes in race studies, aesthetic theory, film, and psychoanalytic theories, working primarily with twentieth-century American literature with special focus on Asian American and African American literatures. She is the author of The Melancholy of Race: Assimilation, Psychoanalysis, and Hidden Grief and Second Skin: Josephine Baker and the Modern Surface. Recent articles by Cheng include: “Sheen: On Glamour, Race, and the Modern,” PMLA; “Skins, Tattoos, and Susceptibility,” Representations; “Psychoanalysis without Symptom,” Differences; “Skin Deep: Josephine Baker and the Colonial Fetish,” Camera Obscura; and “Ralph Ellison: Melancholic Visibility and the Crisis of American Civil Rights,” Journal of Law, Philosophy, and Culture.